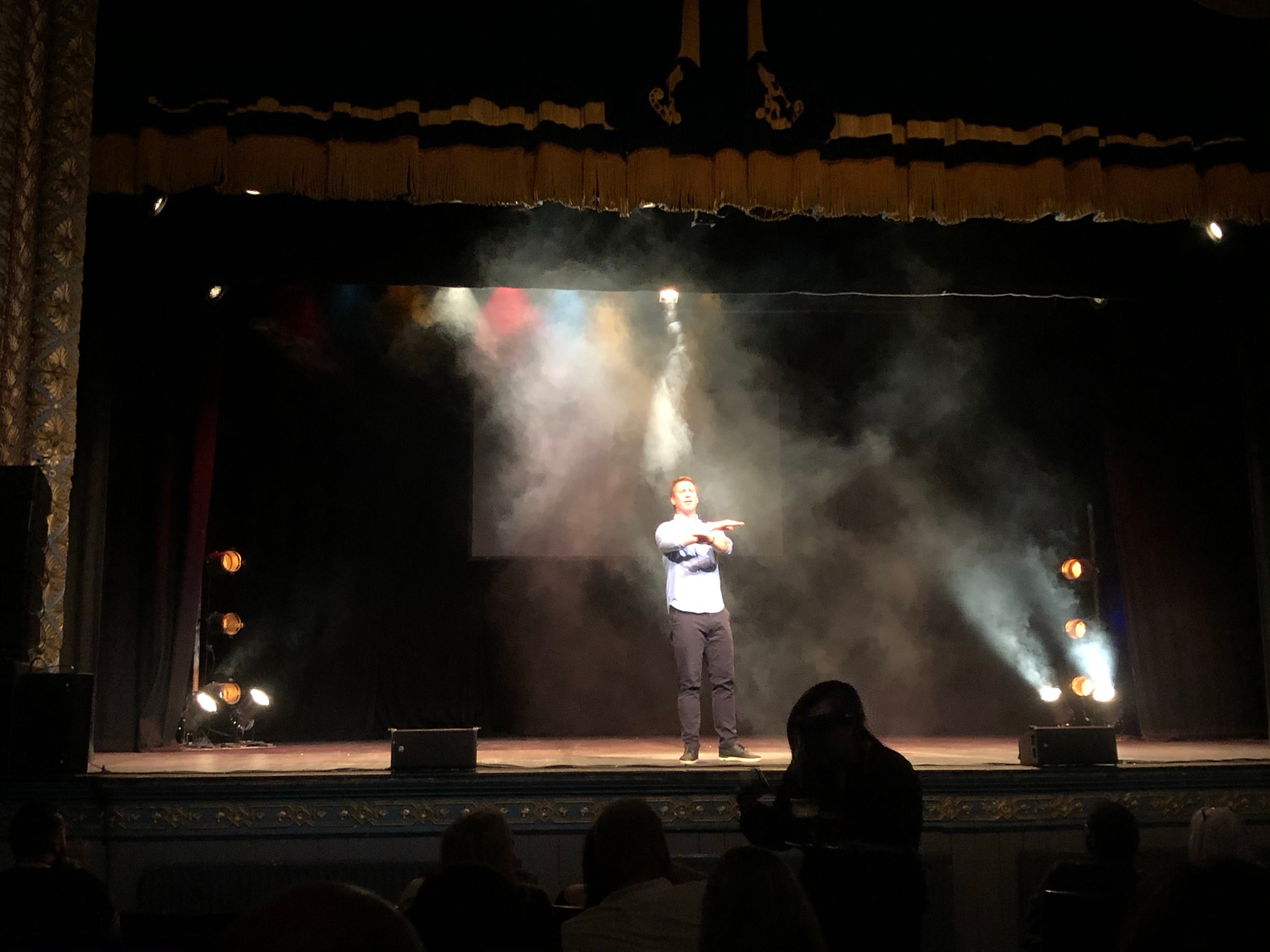 Last night was the first night in almost seven months that the Tyne Theatre and Opera House was able to open their auditorium for a show. It was their first ever socially distanced performance, keeping everything in line with the government’s rules, and, for the staff and audience alike, it wasn’t a normal theatre experience.

Carl Hutchinson headlined the evening with his new material, aptly named ‘Carl Hutchinson Is Allowed To Play Out Again’. He was also joined by support acts Anth Young and Louise Young, both local favourites in the comedy scene. Anth and Louise were both welcomed to the stage in turn and did fantastic jobs of warming up the crowd. Having seen them both perform on Carl’s comedy live streams from the Tyne Theatre during lockdown, I wasn’t expecting anything less.

Upon entering the building, everyone was asked to keep their masks on at all times, to use the hand sanitising stations at the entrance, and to wait at their seats until being instructed by a member of staff to leave at the end of the show. The bars were also closed to audience members and we were instead served with a drinks service at our seats. Perhaps the strangest thing of the night was sitting with our hands up to let the staff know we’d like to buy a drink. It almost felt like being back at school, but it was certainly much safer than being three people deep in a queue at the bar. Seating had also been strategically planned so that every other row of seats was unused and groups of two or four from the same household were separated by at least 2 seats between them. Although the venue holds up to 1100 people, there was only a limited capacity of 200 tickets available for last nights performance, which were all sold out.

Despite the smaller than normal numbers, Carl took the stage to a roaring round of applause. He did hilariously forget his microphone as he walked on stage though, and blamed the fact he hasn’t been able to do a live show in months. But it got the set off to a very funny start! Anyone who has seen Carl live before knows that he’s a born comic and a pro on stage. He interacts with the crowd wonderfully and clearly really enjoys playing to his hometown.

Carl’s material was full of hilarious stories and tales about his career and home life. His inspiration coming from anything from relatable arguments with his wife, to hosting BBQ’s, to farting on a train. There wasn’t a dull moment throughout the night and I was doubled over with laughter numerous times. The theatre was truly brought to life again and it was wonderful to be a part of.

Last night was obviously a special show for Carl as he beamed on stage telling jokes. But it became all the more obvious as he got emotional when it was time to leave the stage. He stated ‘we don’t know when we’ll be able to do this again’. There were a few tears in the house, including my own.

We were led out of different exists, depending on where we were seated, and leaving the venue was very stress-free. It is worth noting that all the staff at the Tyne Theatre were brilliant last night, and made sure that all guests had a great night, and were kept safe, regardless of the strange circumstances.

After the leaving the venue, however, something struck me. It hit 10pm as we travelled in a taxi directly through the city centre, which is currently the curfew time set by the government. We watched hundreds of drunk revellers, mainly young students, pour out of the bars and into the streets of Newcastle. We saw four separate people fall over because of how drunk they were. I have nothing against this at all, because when I was younger I certainly did the same. But what we saw at 10pm is just what would have happened 3am in normal times. The Government have encouraged students to come to universities and stay in halls of residents with hundreds of others, but they have done nothing useful at all to support our cultural businesses, including live venues, pubs and bars. The curfew is doing nothing but cut short vital trading hours for these businesses and encouraging drinkers to get drunker earlier in the day. What on Earth did Boris expect when he brought this into play?

The hypocrisy from the government is not just infuriating but also dangerous while we watch cultural venues across the country suffer and staff be made redundant every day. The way the arts in its various forms has been treated during this pandemic by the government has been an utter shambles. All I can hope is that it doesn’t continue for much longer, and believe in the incredible resilience of UK creatives.

Category: Everything Else, Show and Gig Reviews